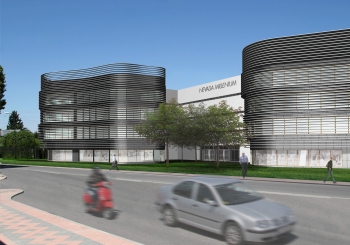 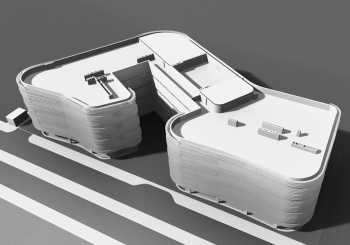 A sensual wrapper for offices. Located on the main road between Granada and Armilla, this site was so irregular that only an organic shape would be able to take it over and make sense of it. But given its dimensions it was not easy to decide whether it should be occupied by a single building or by two. Finally the amoebic shape spawned the final shape of the building, with a large central entrance that tends to cleave it into two parts, although they remain joined in the middle. A sort of cellular division, halted just before the actual separation. The entrance and the lobby are shared, but immediately two vertical communication cores are separated off to feed the northern or southern parts of the building. The facade, like a fringe, tries to wrap the building up to save it from the direct rays of the sun in summer, while not obstructing the views and letting daylight into the offices; nobody will be more than twelve metres from the facade and working space is optimised with the minimum loss of circulation space.